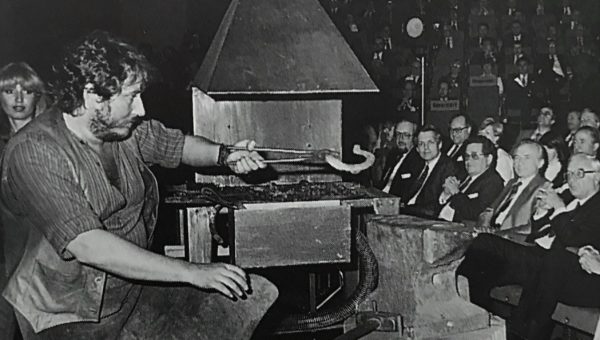 Since 1980 METAV and its structures have been presenting the ideal environment for intensive, constructive dialogue. Launched as an exhibition targeting the domestic market, METAV was to offer in its initial stages a presentation platform reflecting the market, above all to the VDW member companies. Accordingly, the choice of venue favoured Düsseldorf, with the clear intent to safeguard a link to North Rhine-Westphalia. A further factor was the long tradition of exhibitions by machine tool builders along the Rhine and Ruhr. Even before a VDW exhibition was premiered in 1920 in Leipzig, the German machine tool industry had hosted the most significant exhibition in 1902 in Düsseldorf.

Then METAV 1980 experienced a send-off to specification. The modern exhibition premises appealed to the participants, and dealers and importers presented products from over 20 countries. At the inauguration, a horseshoe was forged in front of the auditorium. This was then to prove a lucky charm for the exhibition in the following years. For instance, the following 1982 exhibition could welcome nearly double the percentage of visitors from abroad – and this in spite of the economic depression – with boosts to visitor numbers above all from the Netherlands, Belgium, and Switzerland. And it is primarily still the visitors from these countries, in addition to the regional guests, who remain loyal to METAV.

In the early 1980s, difficulties became apparent in the form of next generation jobs. There was a marked lack of society’s interest in technology, which was even more so among the younger generation. With the intent to initiate a reversal of this trend, VDW invited young persons to the METAV debut and informed them of the opportunities in the metalworking professions. In 1982, this offer became an institution with “Jugend METAV” under the banner Der Start ins Berufsleben (“Embarking on a profession”): Backed by the dedication of 21 companies, a Lehrwerkstatt in Aktion (“teaching workshop in action”) presented in-house training in metalworking on 1,000 square metres. An approach that VDW has pursued faithfully by setting up “Nachwuchsstiftung Maschinenbau”, a next generation foundation for machine building, and the “METAV Sonderschau Jugend”, a special show for young persons.

Instead, with the METAV web aessions, the VDW offered all exhibitors and visitors a channel for the practice-oriented exchange of information and ventured into the virtual world with METAV digital in March 2021. The VDW will draw on this experience and continue to expand the trade fair's digital offerings in the future. At METAV 2022, exhibitors and visitors can now look forward not only to the well-known good atmosphere and clear product structure, but also to a METAV in hybrid form. Then we will say: Real & digital - the perfect match!